This is the opening of Chapter 4: Character Creation. The rules on character creation presented here are comprehensive, but not exhaustive. The rest of the chapter takes a closer look at each part (Elements, Skills, etc.), but this is the basics. We'll look at them in more detail going forward.

Missing is a list of Meibutsu. I do have a solid list, but it would be introduced uji by uji in Chapter 2; a condensed list may appear as a single page in this Chapter. Perhaps an appendix showing uji, their fealties, their Disciplines, and their Meibutsu. 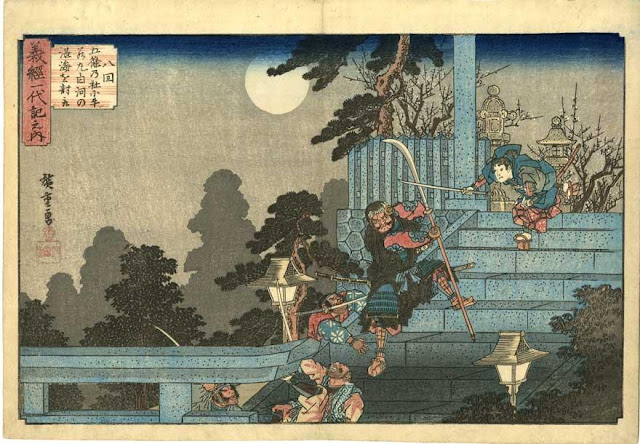 There's enough in Chapter 3 to see how the engine of the game works. Now it's time to put all the pieces together and add additional elements until you've built a character that interacts with that system. This chapter describes, in brief, the steps for building a character, then goes into detail about rules concerning each aspect (Elements, Skills, Virtue & Glory, etc.). The details of Dharma and Discipline are glossed over and given a rough sketch; in-depth coverage of those aspects is left for Chapters 5-8.

There are 11 steps to building your character in Hachigoku:

Step 1: Faction & Meibutsu
There are numerous uji, otokodate, and other factions scattered throughout Hachigoku. Choosing to belong to one, or none, begins determining the future of your character. Each uji and otokodate bestows a meibutsu (“a little thing”), some particular practice or knowledge they are popularly noted for. The meibutsu translates into a bonus Skill at Rank 2 with a free Aspect, a combination unique to the faction. If you wish to create a new faction (either an uji or otokodate not otherwise described), their meibutsu must not be identical to one pre-existing. So, as the Owari uji has Senjojutsu (Strategy), no other uji should have that meibutsu, although it could have Senjojutsu and some other Aspect. Meibutsu between different types of factions, however, do not conflict; there could also be an otokodate with Senjojutsu (Strategy) as a meibutsu.

The factions are described in detail in Chapter 1: Hachigoku, but at the end of these character creation rules are some charts describing pertinent mechanics for quick creation. Choose among three options below:

Samurai naming practices are given examination in Chapter 1, but it bears a quick recap. An uji samurai will have an uji name, an ie name, and a personal name. Yanigasawa no Owari Azumi is thus the samurai Azumi, of the Yanigasawa uji and Owari ie. Ronin have their own personal name, and may or may not have an ie name; they often have a nickname as well.

Your name may benefit you as certain Fortunes are discounted from Major to Minor depending on your uji or ie membership, and certain uses of a Skill are similarly restricted. In the case of an uji, these differences apply to any character sworn to the uji, including vassal uji, or even with the same family name, as traditions and bloodlines extend along familial ties outside the uji. Such Fortune and Skill restriction, discounts, or differences are listed in their descriptions. A few rare Fortunes and Skills may be even more precise, as noted in their descriptions.

Step 2: Elements
As a character, your basic physical and mental abilities are broken down into Elements, which symbolize the application of a metaphysical relation between the five elements of Hachigoku philosophy: Earth, Fire, Water, Wind, and Void. These Elements each have Ranks, ratings that measure your strength in each element.

Step 3: Dharma & Discipline
Your Dharma is an honor, and transitioning between them is nearly impossible. As kharmic positions, they reflect your profession and expected responsibilities in life. Every samurai must choose one, and only one, of the three Dharma:

If you are a Ronin, you don't choose a Discipline. Certain otokodate and sensei teach Okuden unique to wave men, but you must qualify for their instruction. These are detailed in the Chapter 8: Ronin, and you may begin play with one Okuden taught by your otokodate if you meet its qualifications. Ronin onmyoji must choose either nai-renkinjutsu or gai-renkinjutsu and a single Element (Fire, Earth, Water, Wood, or Metal) they begin play able to use.

All Element & Skill requirements are Rank 3.

Since a beginning character typically only knows a single Okuden, your Dharma is 1. As long as you have a Dharma, you still have a single Dharma Rank even if you know no Okuden. Thus, a Lonesome Ronin has Dharma 1.

Step 4: Virtue, Glory, & Honor
Now you calculate your On (“face”), a measure of respect, renown, and adherence to Bushido. On is divided between two aspects: Virtue and Glory.

Virtue reflects your internal adherence to the tenets of Bushido, your own measure of worth. It is measured in Ranks, but is limited by your Void + your highest Dharma. How many Ranks you begin with depends on your faction:

Glory reflects the public fame and respect you garner, and is measured in Ranks. Like Virtue, the only limit on your Ranks are your own: you cannot have Glory higher than your highest Element + highest Dharma. How many Ranks you begin with depends on your faction:

All samurai begin with Honor ready to spend. Honor is the application of Virtue and Glory, and your starting Honor is thus equal to their Virtue plus Glory, multiplied by your Void. You continue to gain such Honor (depending on your current Virtue and Glory) at the beginning of each new Story, without considering your Void, in addition to any Honor saved from the last Story.

Step 5: Skills & Aspects
Skills represent the myriad learned abilities of your character, distinct from the raw application of your Elements, yet are measured in Ranks like Elements, with a range of 1 to 10.

If you are an Uji Samurai your chosen Discipline assigns you six Skills. You need to prioritize these Discipline Skills in the same manner you did Elements, with the following distribution: 5, 4, 4, 3, 3, 3. So, one Skill at 5 Ranks, two Skills at 4, three Skills at 3.

Then choose 2 additional Skills reflecting your own individualization and interests. These Skills must be different from your Discipline Skills. These Skill Ranks are determined by a corresponding Element:

If your Meibutsu is identical to a Discipline Skill or one of your individualizing Skills, add the Ranks together (making it possible to have a Skill at 7).

If you are a Ronin, choose any 8 Skills. Their Skills Ranks are equal to their corresponding Elements, and if you are an Otokodate Ronin you may add the Ranks of your Meibutsu to any of these Skills, just like Uji Samurai.

Finally, whether you belong to an uji or choose the path of a Ronin, you have three more Aspects to spend on your Skills. These Aspects can be spread out among your Skills however you choose, whether they are all chosen in a single Skill or in three different Skills.

Step 6: Outfit
If you are an uji samurai your Discipline determines your Outfit. Fortunes chosen during character creation may change the Quality of your equipment, replace it with other items, or remove items altogether. If you are a Ronin your starting outfit depends on your Dharma, all of standard Quality:

Step 7: Fortunes
Fortunes are qualities, events, or situations peculiar to your character that represent benefits life has granted them before play, or obstacles they must work to overcome. Fortunes are considered either Minor or Major, and each grants both a Boon and a Curse. Each character gains Minor Fortunes equal to their Void for free, and a Major Fortune is worth 2 Minor ones.

Optionally, you may renounce a single Bushido Virtue to gain another Major Fortune (see Virtue, Glory, & Honor further on in this chapter), but must accept the consequences.

Step 8: Obligations
Your samurai isn't just a rootless wanderer. Even a ronin has some role in society to play, however grudgingly. You gain Obligation Points equal to your Glory, and spend them to purchase positions of responsibility in your faction: Obligations. These give you additional Season Actions, koku, Kaonashi aid, Free Raises, and other benefits. Each Rank in an Obligation costs you 1 Obligation Point, and no Obligation may exceed your highest Element.

Step 9: Wa Creation
Now that your character is complete, gather with the other players to create your Wa, a bond between your characters forged to promote cooperation and define a direction for the campaign. This is a chance not only to solidify the relationships between your characters, but to signal to the SD just what kind of honor you, as a group, value. Word your Wa's oath carefully. Your Wa's starting Rank is equal to the highest Glory among your samurai. Also, you can pool your ability to buy Obligations together with other Wa members for stronger Obligations.

Step 10: Season Actions
Season Actions are how your character grows and advances over the course of the game. Most games typically start in the Spring; this is not ironclad, however. You can go ahead and plan your first Season Actions now, before the first Story begins.

Step 11: Finishing Touches
You should marshal together a small arsenal of biographical data about your character. Parents, siblings, rivalries, enemies, tastes, hobbies, training experience, hometown, etc. are all pertinent in developing who your character was and why they are.

In addition, there are a few housekeeping elements to take care of, some elements of rules given in Chapter 3 you might want to go ahead calculate now to ease play later, such as knowing your Initiative and Defense. To briefly review:

If you think you will often be using other rules, such as Vendetta rolls or prayer rolls, take a moment to calculate those ahead of time, too.

Just like some Kaonashi can be considered “Experienced,” tougher and better trained than their “inexperienced” comrades, so too might your samurai. Mayhaps, instead of an epic tale of how your humble Wa achieved its goals after years of struggle, you just want a light adventure drawing katana first and asking questions never for a few nights, enjoying the power of being exceptionally well-seasoned. Or your samurai has fallen in battle or is too shamed to continue; it's time to create a new one, but you don't want to drag down the Wa by being weak or lose all the time you put into bringing up your champion.

No problem. You can advance a new samurai easily by putting them through additional Seasons, along with Season Actions. Of course, these Experienced samurai will go through their Seasons slightly differently. Since they're not having any grand Stories, they miss out on several social advantages such as Romance, Allies, etc. Nor do they gain any additional Glory, Virtue, or Honor, except those that come along automatically, such as from Fortunes; you can also assume they're recognized for learning new Okuden and the like, unless they have a good reason to avoid fame. In return, their Obligations suffer no Trouble.

How Experienced should you be? It's best the players and SD negotiate the best option for themselves; yearly increments give the best “feel” for differing power levels, if you're all setting up a new Wa. If you're replacing a lost samurai, you can give them the same number of Seasons as the campaign has covered up to now, minus a year. Ignore the subtraction if your Wa has not yet survived a full four Seasons.

Since Hachigoku's system does not assume “balanced encounters” (not every Scene should be a simple matter of fight or flight!), this isn't strictly necessary, especially if you want a cutthroat, knife-edge existence for the samurai.

But you don't have to want that at all.