Skills of the Samurai, Part 1: Just the Crunch

The Skills section is understandably sizeable, although I've been pruning, pruning, pruning. I'm breaking it up into three separate posts. The first post is a look at the general rules governing Skills, like their groups, ranks, Aspects, etc.

The 2nd and 3rd posts will cover the actual Skills. 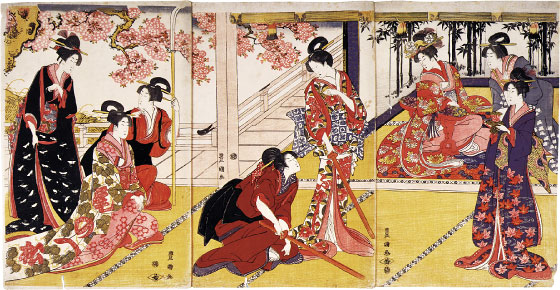 Just as people have Elements, people have Skills. Probably. However, while Elements define who and what you are, Skills define what you know and can do. Thus, Elements largely represent potential, while Skills portray potential's fulfillment. And, like Elements, your aptitude is measured in Ranks, ranging from 0 (for a Skill you are utterly unfamiliar with) to 10. Skill rolls usually involve an XkY roll, where X is your Skill Rank and Y is your Element (or occasionally Glory, Virtue, etc.) Rank, in addition to any other modifiers. When such rolls are called for in the rules, be it in Skill description, Okuden descriptions, or anywhere else, they are usually written as Skill/Element.

Often, you will encounter situations where you do not have Ranks in the proper Skill needed for a task. Usually, you can attempt the task anyway. This is considered an unskilled roll, and only very complicated Skills or Aspects will bar you from making an unskilled roll. When making such a roll, you make an XkX roll, where X is the Rank of the appropriate Element (or Glory, Virtue, etc.). Your dice do not shout, nor can you make any Raises; you may still benefit from Free Raises. Okuden can never be used with unskilled rolls, unless the Okuden explicitly says so.


If you have only 1 or 2 Ranks in a Skill, you can choose to make the roll unskilled; you're still incompetent enough to succeed by accident. However, if you have 3 or more Ranks, you must make normal Skill rolls; you have conformed to the Skill's accepted and conditioned methods by then, and there's no going back.

The array of Skills are grouped into four general categories, based on what value society places on each: Jutsugaku, Bugei, Chonin, and Hinin. Some are considered glorious or honorable for samurai; others are disgraceful to know or use. Certain uses or knowledge may also move it temporarily into a different Skill Group (such as a Jutsugaku Skill used in a dishonorable manner, making it a Hinin Skill in that situation). These mostly affect how a Skill interacts with a samurai's Virtue, Glory, or Honor.

Jutsugaku Skills: Jutsugaku Skills are most favored by teishin, artisans, and other socially adept samurai. Jutsugaku means “practical learning”; not in the sense of pragmatic reasoning, but in the practical skills of social maneuvering, government service, and cultural refinement. They cover a variety of social, artistic, and scholarly skills. Great skill in such areas is considered virtuous.

Bugei Skills: Bugei Skills are most often favored by bushi, metsuke apprehending criminals, and other combat-oriented members of the samurai caste. They represent weapon skills and other physical, combative actions. Great skill in such areas is considered glorious.


Chonin Skills: An odd middle ground between Jutsugaku and Hinin Skills, Chonin Skills are not considered inherently dishonorable. They are practiced by most of Hachigoku's population, but are too “dirty” for samurai to associate with, except in just the right circumstances.


Hinin Skills: Hinin Skills are considered shameful to practice or even know; they are the province of lowest caste people. Samurai do not practice such things... at least, not publicly.

Subgroups are focused more on application and less on cultural concerns, and vary in importance. Every Skill belongs to a Group, but not to a Subgroup. Different Subgroups function more like “tags” interacting with other mechanics, such as Okuden or Fortunes, or regulate some other special rule among select Skills. Even if a Skill is not tagged as a certain Subgroup, but shares a term in its name, it remains in that Subgroup. Thus for the Lore Subgroup, it is a Lore Skill if that's part of its name, such as Lore itself.


Bujutsu Skills: Any Skill that directly involves the use of a weapon in combat is a Bujutsu Skill. In addition to its normal combat use, a Skill/Wind roll can determine a weapon’s Quality. Do not use this to give yourself an unreasonable advantage, because only a wanker would use a Raise to declare his opponent suddenly wielding a Poor Quality katana. Most Bujutsu Skills are Bugei Skills.


Karate Skills: Any Skill used in unarmed combat is considered a Karate (“Empty Hand”) Skill. This is used mostly by heimin, but even most samurai are given some rudimentary jujutsu training, and sumai techniques are considered very honorable.

Skills have Aspects listed with them. An Aspect gives you specialized knowledge or ability in a narrow area of expertise within the Skill, although it may or may not be necessary to use an ability of the Skill. A roll involving an Aspect will sometimes be written as Skill (Aspect)/Element, but usually it can be assumed. If you are attacking a foe with a katana, you can assume the normal Kenjutsu/Fire roll implies the Katana aspect (or Iaijutsu Aspect if appropriate, etc.).


Skill Bonus: When using a Skill in an area where its Aspect directly applies, you can add your Skill Rank to the total of your Skill roll. If you have more than one Aspect that applies to the roll, you still only gain this bonus once.


Aspect Cap: You cannot have more Aspects in a Skill than you have Ranks in that Skill.


Skill Group & Subgroup: Any Aspect in a Skill is considered part of the same Skill Group or Subgroup as its parent Skill. Unless an Aspect says it is considered a different Skill Group (or even Subgroup) when used by different characters or in certain situations, treat it as the appropriate type only when in use, such as in terms of affecting the character’s Virtue, Glory, Honor, etc.

Beyond these languages there are a host of others. They may derive from isolated parts of the Empire, foreign nations, extinct civilizations, or supernatural creatures. Knowing how to speak, read, and write them requires their accompanying Aspects. Which Skill the language is associated with depends on the source of the language, and may even be available to multiple Skills. Thus, foreign languages are often covered by Rangaku, while supernatural languages are usually covered by Shingaku or Renkinjutsu. Of course, displaying this knowledge outside of expedient necessity makes others decidedly uncomfortable.

This is not an exhaustive list of languages found outside Hachigoku, just a snapshot of those most likely to be of interest to a samurai and found in the gaijin sections of major port cities. A quick list of languages and their Skills:

Aspects: If a Skill has any aspects, these will be listed here. Any Aspect that is labeled “Specific” (Specific Animal, Specific Weapon, etc.) infers a myriad list of different Aspects individualized for each appropriate type. Kenjutsu lists Specific Weapon as an Aspect, meaning that you can specialize in the katana, wakizashi, odachi, etc. as individual Aspects.

Description: What the Skill and its Aspects do.

Experienced Abilities: Any abilities gained from higher Ranks in the Skill. The generic Mastery Abilities of every Skill are not repeated (Free Raise at Rank 5, for instance).

Aspect Abilities: Any abilities listed here, and not detailed in the main description, require an Aspect to use. They cannot usually be attempted without such specific knowledge.

Note: If the Skill does not have an applicable entry (such as Subgroup, Mastery Abilities, etc.), the entry will be absent.