What does the well-dressed samurai wear? Outfit & Equipment Part 3 (Clothes make the samurai)

Finally, the last bit of Outfit & Equipment. Way too much research into clothes. I know, I know... this may be cut down later. No, it needs to be cut down. 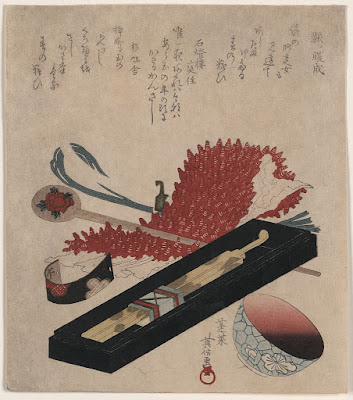 Clothing
Clothing in Hachigoku varies by season and social caste, with most clothing made of hemp, cotton, or silk. Leather and fur are rarely used, except in the northern mountains or among the Ikeda uji and their associates.


At its most basic definition, kimono just means “a thing to wear.” Everything else is flourish. In your character's outfit, there will be listed a kimono. There might even be 2 kimono. Simply assemble an outfit from the provided clothing appropriate to your character.

An onmyoji mght wear elaborate kimono, or a simple sumue, kiahan, and waragi.

Assume that a fundoshi and shitagi are part of your armor, if you have any. Additional clothing items can be chosen as part of your traveling pack, yes, even the Rare items, or provided by your daimyo at appropriate times.

Kimono: Kimono are considered the default clothing of the samurai caste; few others in the Celestial Order can afford them. Merchants and artisans of wealth often can, and various sumptuary laws in different uji han often regulate style so that the lower castes remain visually separate from samurai. The T-shaped kimono is woven of silk, designed to be taken apart for cleaning and stitched back together. The kimono is worn folded over in the front, across the chest, and held closed by the obi, a silk or satin sash acting as a belt; the size of the obi depends on the style of kimono. Samurai tend to wear thick but thin obi, where their two swords are stashed. Purses and other items are often kept within the chest fold, resting against the top of the obi. The sleeves of the kimono fall to the wrist when the arms are down, and are usually wide and loose, depending on style. Those worn by militaristic samurai tend to be plain and reflect their uji's traditional colors and mon; those worn by women, teishin, and prosperous members of the lower caste are highly decorative, with natural vistas, flowers, birds, and butterflies being common. There is among kimono aficionados a complex system of aesthetics varying by season. The kimono have several different variations:

Hakama: The hakama is a wide divided (umanoribakama) or undivided (andonbakama) skirt.

Footwear & legwear: There are various types of footwear in Hachigoku, made from materials as different as wood, cotton, grass, hemp, or, rarely, leather.

Headgear: Aside from helmets, people of Hachigoku wear stuff on their heads, too.

Yutaka (Common): The yutaka are similar to kimono, but lighter and made of cotton. Some yukata are even made of hemp, among the lowest castes. The designs can be plain or simple, depending on season and social caste. Most yutaka resemble komon or iromuji kimono, while more elaborate styles are reserved for festivals and formal occasions. They are especially popular during the summer, but non-samurai often wear them year-round.

Fundoshi (Common): Fundoshi is a loin cloth undergarment worn by men or by both sexes when wearing armor. It is often worn by laborers when the weather is particularly hot.

Shitagi (Common): A white undershirt, made of cotton, commonly worn by samurai underneath their armor.

Gi (Uncomon): Often padded, these cotton kimono-like clothes are worn in the dojo during training, usually in unarmed combat. While the most traditional color is white, certain dojo may prefer other colors as a way of standing out.

Kesa (Uncommon): The kesa is a flowing, cotton robe wrapped around the wearer over the shoulder, usually leaving one shoulder bare. Other clothes may be worn under it. The exact style varies by shinden, as it is the traditional robe of onmyoji who live in monasteries.

Samue (Uncommon): Made from cotton, the samue is a kimono-like garment worn by onmyoji for labor, such as temple maintanence or field work. It is usually brown or indigo to differentiate it from more formal clothing.

Happi (Common): A haori-like jacket of cotton, light and often worn by merchants and at festivals. It has wide sleeves but lacks the pointed shoulders of the haori. Thick, leather happi (considered Rare) are usually worn by urban firefighters, and count as ashigaru armor in a fight.

Netsuke (Common to Rare): Ornamental jewelry hung from the obi, usually by men.

Everything Else
There are a wide variety of items for purchase or crafting within Hachigoku. While many are analogous to medieval Europe or even modern times, those particular to Hachigoku are listed below:

Almost all characters are issued in their Discipline's Outfit a traveling pack. But what's in it? Basically, the traveling pack is a collection of miscellaneous items for traveling, but can also represent other items peculiar to your interests, hobbies, and specific needs.